IN CLECKHEATON, BRADFORD, LEEDS and surrounding areas If you have a problem with moles, squirrels, rabbits or any other pest at your property, Sykes Pest Control can resolve it discreetly in our unmarked vehicles. We are available throughout Cleckheaton, Birstall, Bradford, Brighouse, Batley, Dewsbury, Leeds and the surrounding West Yorkshire areas.

It is estimated that there are between 35-40 million moles in the UK, however they are rarely seen as they spend almost their entire life underground.  Moles belong to the mammal family Talpidae and the mole that lives in the UK is Tulpa Europaea or CommonMole.

The mole is the only mammal to live solely underground and is able to achieve this because they have a greater number of red blood cells than other mammals.  This enables them to live in an environment where oxygen levels are low.  Male moles are called ‘boars’ and female moles are called ‘sows’.  A group of moles is called a ‘labour’.

Moles have a cylindrical body, strong shoulders and broad, spade-like limbs with claws.  Its snout is pink, hairless and extremely sensitive.  They measure around 14 cm in length and a 2.8cm tail.  Their fur is soft, thick and silver-black in colour.  Moles have very poor eye sight and no external ears, however they have excellent senses of smell and touch.  Moles are industrious workers and phenomenal diggers and can shift 540 times their own body weight of earth per day tunnelling up to 200 metres in 24 hours.  New tunnels are dug, throwing up more mole hills in search of food.

Moles are carnivores and feed almost exclusively on small invertebrates living underground such as earthworms and beetle and fly larvae.  A moles’ saliva contains a toxin that can paralyze earth worms.  In this why moles are
able to store their living prey in a specially constructed larder. 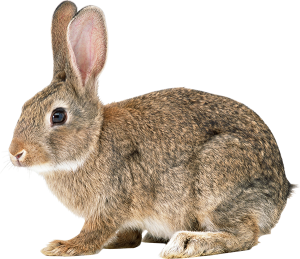 Rabbits are one of the UK’s most familiar mammals.  What many people don’t realise is that rabbits are not a native to the UK.  Rabbits were brought to the UK 900 years ago from France by the Normans.  They were used as an important source of meat and fur.  Many of these escaped and thrived, leading to the large populations we see today.  Adult rabbits can grow up to 40cm long and weigh between 1.2kg and 2kg.  A male rabbit is called a buck and a female rabbit is called a doe. Rabbits are resourceful and thrive in both rural and urban areas.  They live in underground burrows and a group of burrows is called a warren.  Rabbits feed on any available vegetation including grasses, growing trees, tree bark, small herbs, garden plants and agricultural crops.

The breeding season runs from January to late summer.  They are prolific breeders and one adult female can produce up tp 7 litters of 3-7 young in one year.  These young are then able to start reproducing at just a few months old.  This high rate of reproduction is one of their main reasons for their success.

Rabbits are a major pest species in the UK with more and more habitats falling victim to the destruction that they cause.  It is estimated that rabbits cost the UK agricultural industry £100 million a year through crop damage.  Burrowing rabbits also pose a threat to both livestock and horses alike, animals breaking legs in rabbit holes is not uncommon.  Without a doubt they are the number one pest species for farmers.  Hundreds of thousands pounds worth of damage in the forestry, plantations and orchards industries is also caused by rabbit population.  Ring barking, which is caused by rabbits gnawing the whole way around the base of a tree, is the most common problem.  When a tree has its lower bark completely removed it will die.  Tree guards can help to a degree but rabbits often chew through them causing destruction and the tree to eventually die.

Due to being so resourceful and such prolific breeders rabbits are thriving in urban and industrial areas.  Rabbits tunnelling under paths, roadways and buildings can cause weakness and damage to the structures.  Rabbits can cause fires and flooding due to their chewing and digging and is very much a health and safety issue.  Rabbits cause all sorts of problems in gardens: they eat plants and flowers and dig scrapes in search of young shoots. Their burrows also risk injury to both humans and pets.  Rabbits will often reside under decking, garden sheds and even houses, this could potentially cause issues such as subsidence and the risk of fire due to chewing electrical wires.  Wild rabbits can also pass on diseases to pet rabbits.

Rabbit numbers can increase dramatically if not controlled.  It is highly advisable that a professional pest control company is contacted and the correct advice sought.  Here at Sykes Pest Control our technicians are fully trained and knowledgeable and follow the correct procedures in controlling rabbit populations.

The grey squirrel is a common mammal in the UK.  It is not native to the British Isles and was introduced from North America during the late 19th century.  The grey squirrel has since thrived displacing the native red squirrel across most of England and Wales.

A male squirrel is called a buck and a female squirrel is called a doe.  They can grow to a length of 24-26cm with a tail of between 19-24cm in length and weigh between 450-650 grams.  Squirrels usually live in a drey (a nest made from twigs, leaves and moss) high in trees but are becoming more increasingly common living in and nesting in attic and roof spaces.  A female squirrel typically produces 2 litters of 3-7 young each year.  Grey squirrels eat seeds, buds, flowers, shoots, nuts, berries and fruit.  They will also eat fungi and insects and have been known to occasionally eat birds eggs and fledglings.  Squirrels are also known to strip bark from trees during the summer months.

Squirrels frequently enter building roof spaces and can inflict serious amounts of damage.  They chew wood, water pipes, strip insulation from electrical wiring and tear up fibreglass insulation. This can be very dangerous and lead to fire or flooding.

Although there are products available to the general public for the control of squirrels, it is important to remember that you then have the responsibility of disposing of the trapped squirrels.  This must be done humanely or you could be prosecuted.  Grey squirrels are recognized as a foreign pest species under the Wildlife and Countryside Act 1981.  This legislation requires that any live trapped squirrels are killed and not released.  For this reason it is recommended that a professional pest control company is contacted.

Here at Sykes Pest Control our technicians are highly trained, knowledgeable and all work is carried out safely and in accordance with the legal requirements.

We provide pest control services in Cleckheaton and anywhere in the surrounding 25 mile radius.

If you need pest control services in Cleckheaton or anywhere in the surrounding 25 mile radius.

If you need pest control services in Cleckheaton or anywhere in the surrounding 25 mile radius.

What Our Clients Say

At Sykes Pest Control, we offer quality pest removal services. You can rely on us to remove rats, bees and more. Check our customer reviews below to see what our customers have to say about us.

Sykes Pest Control
5.0
Based on 80 reviews

George Norris
14:29 14 May 20
Rang on the Monday morning and came Tuesday morning. Very knowledgable and could see the problem straight away. Dealt... with our problem straight and even came the following week to follow up. Fast, efficient and very effective. Would highly recommend, thanks again!read more

Ali Kilner
12:38 11 May 20
Danny was really quick to respond to my enquiry online and able to attend to our bee problem the next day. On arriving... was quick to get straight on with the job at hand helpfully taking away most of the bees and dealing the last remaining stubborn few who didn’t want to leave. Overall a great professional service and if I had another pest problem I’d not hesitate to call on him again. Thanks Danny.read more

anita pullan
11:40 04 May 20
Sykes Pest Control have done a great job to get rid of the squirrels in our loft.After many nights of not getting much... sleep due to banging noises in our loft,Danny came to rescue. He’s punctual, very professional and gives the right advice on what needs to be done.Not only has he got rid of the squirrels and saved us lots of damage being done to the loft, he has also fixed the hole they were using to get in. His work is great and too of a very high standard. Would definitely recommend him .Thank you so much Danny!read more

Naomi Delashley
17:51 29 Apr 20
Rang up over a week ago as I had rats in my shed and around it danny came out that same day and treated the issue was... so happy with the service and how friendly Danny is... came back to check I wouldn’t come across any dead as I’ve been a frantic mess especially with having kiddies and just generally gone above and beyond! Highly recommend and will use again if I ever need to thank you 🙂read more

Gotyasize Fighting Fit
22:08 07 Jan 20
This man is brave 👏🏻👍🏽Fast response, great service all round. Danny came to my house, identified rat... problem and put poison down. Came back a week later to block all the entrances and routes for rats. Very professional and well experienced. Strongly recommend using Danny for any pest issues.read more

amir mushtaq
16:12 10 Dec 19
Fantastic guy. Found a rat in my house. Danny came round found where the rat got in placed some rat poison. Haven't... seen the rat since. He came back 14 days later to seal entry point for rat. Lovely guy. Knows what he's talking about and has 26 years experience. Would highly recommend.read more

Keith Naylor
08:27 02 Oct 19
Fast effective treatment of wasps nest at very reasonable price. Would highly recommend Sykes Pest Control.Don't... struggle like I did for days trying to do the job yourself. Call Danny at Sykes Pest Control for fast expert treatment and quick peace of mind.read more